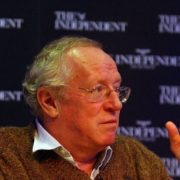 Council on International Relations – Palestine (CIR) mourned the death of the veteran UK journalist, the Independent’s Middle East correspondent, Robert Fisk who died at the age of 75.

The council said in a statement issued, Tuesday, that Palestine has lost a journalist who supported the Palestinian right and strongly opposed to the crimes of the Israeli occupation.

“Fisk documented many historical events in the region in his writings and coverage, highlighting in particular the reality of the Palestinians under the Israeli occupation”, the CIR added.

The statement concluded by sending sincere condolences to Fisk’s family, friends and loved ones around the world.

Veteran British journalist Robert Fisk, one of the best-known Middle East correspondents who spent his career reporting from the troubled region and won accolades for challenging mainstream narratives has died after a short illness.