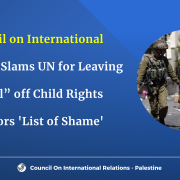 Council on International Relations – Palestine (CIR) slammed the UN for leaving “Israel” off the “list of shame” issued for organizations and countries that violate the rights of children in conflict areas.

The Council said in a statement issued Friday, that this decision of the Secretary-General of the United Nations not only exonerates the occupation, but also gives it the green light to continue its crimes and violation of all international laws.

“This year report contradicts itself, as it stated that the Israeli occupation bears responsibility for killing 78 Palestinian children and maiming 982 others in the occupied Palestinian territories in 2021, and at the same time it did not include “Israel” in the list of countries and groups that violate the rights of children, the CIR added.

The Gaza-based body called on the Secretary-General of the United Nations to correct this grave mistake and add “Israel” to the list of shame, and even activate all international tools to hold it accountable for its crimes and provide protection for Palestinian children.

The “list of shame”, which presently includes 57 government military units and non-state armed groups accountable for serious abuses against children in armed conflict, is a crucial accountability instrument. According to UN regulations, countries listed on the list are only removed after agreeing to and carrying out an action plan to stop their infractions and may be subject to sanctions from the UN Security Council.