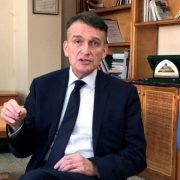 Council on International Relations – Palestine said that the statements of the UNRWA Acting Commissioner-General, Christian Saunders, confirm what the council went before that the crisis is political, not financial.

The Council noted in a brief statement Monday that Saunders’ statements demonstrate beyond any doubt that the United States and the Israeli occupation are striving to liquidate UNRWA and end the Palestinian refugee issue.

In its statement, the CIR called on the international community, especially the UN, the European Union and foreign parliaments, not to surrender to this attack and to mobilize support for the agency, and not to give the American administration and the Israeli occupation the opportunity to implement their plans that aim to liquidate the agency.

The Acting Commissioner-General of UNRWA, Christian Saunders, has accused the United States and “Israel” of working against the agency and pressuring foreign parliaments to stop donations.