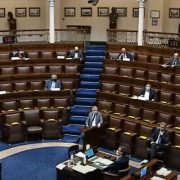 Council on International Relations – Palestine praised passing a motion by the Irish parliament tabled by Sinn Fein to declare the building of Israeli settlements in Palestinian territories as de facto annexation.

The Council said the motion is an advanced position issued for the first time by a European country, and reflects the change imposed by the peoples supporting the Palestinian cause.

“The motion confirms “Israel’s” violation of international law, by continuing its settlement policies and forced displacement of the Palestinian population, the latest of which was the attempts to forcibly evict the residents of Sheikh Jarrah neighborhood in Jerusalem”, the CIR noted.

The Council called on all European countries to take adopt similar motions, especially in light of the war crimes “Israel” committed in its recent aggression on the Gaza Strip, which requires a strong position that deters the occupation from its crimes.

Ireland has become the first EU member state to declare the building of Israeli settlements in Palestinian territories as de facto annexation, after the Dáil on Wednesday night passed a motion tabled by Sinn Fein.