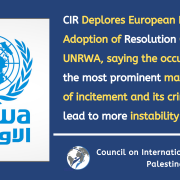 Council on International Relations – Palestine deplored the European Parliament’s adoption yesterday of a resolution condemning the UN Relief and Works Agency (UNRWA) under the pretext of teaching hate and violence.

In a statement issued Friday, the council said the decision follows continuous Israeli incitement against the Palestinian curricula, indicating that the occupation is the most prominent manifestation of incitement and its crimes only lead to more violence and instability.

The Council noted that the Israeli education curricula and media are full of racism, hatred and detracting from the humanity of others, especially Arabs and Palestinians, and full of distorting their image and denying the existence of the Palestinian people.

Promoting national identity in the Palestinian curricula and being not bias towards the occupation is not incitement, but rather a duty UNRWA must continue to reinforce, the CIR said, adding that since the UNRWA is committed, according to the mandate, to adhere to the national curricula in the regions in which it operates.

The Council called on the European Parliament to stop these double standards in dealing with the Palestinians and revoke its decision, and not to rely on the Israeli narrative. “The Parliament should monitor the Israeli education curricula to end the racism and violence that our people suffer from through the daily practices of the occupation”, the CIR added.

Yesterday, the European Parliament adopted a resolution condemning “UNRWA” for teaching “hatred and violence against Israel” through Palestinian schoolbooks as mentioned in the resolution.