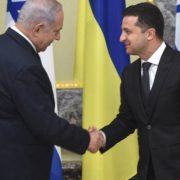 Irish writer: Europe will not be honest mediator for its hypocrite, duplicate...
Scroll to top