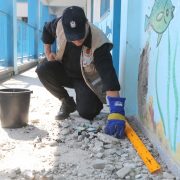 Council on International Relations – Palestine (CIR) condemned the Israeli occupation’s attack on an UNRWA school at Thursday dawn today, which caused damage to the school and put hundreds of students at risk.

In a statement issued Thursday morning, the Council said that attacking civilian institutions, including international institutions operating in the Gaza Strip, is a war crime added to the ongoing war crimes committed by the occupation against the Palestinian people and their rights, including the right of return for refugees.

The CIR stated: “This attack is not the first of its kind, as the occupation has always been used to attacking these institutions as it realizes the importance of their role in being witness to the tragedy of the Palestinian people and the ongoing occupation crimes.”

The Council called on the international community to denounce this crime and hold the occupation accountable by suspending international support for it, boycotting it and imposing sanctions on it, stressing the importance of continuing to support UNRWA to ensure the continuation of providing its services to Palestinian refugees.

The Ministry of Interior and National Security in the Gaza Strip, Thursday, announced that an Israeli warplane, at dawn, fired a missile at a school belonging to the United Nations Relief and Works Agency for Palestinian Refugees, “UNRWA”, in Al-Shati refugee camp, west of Gaza City, no injuries reported.

Israeli warplanes and artillery fired this morning several missiles and shells at various targets in the north and south of Gaza Strip causing heavy damage to the sites and buildings nearby but no injuries.

CIR Confirms Right of Palestinians to Jerusalem Will not be Nullified by Occupation,...
Scroll to top