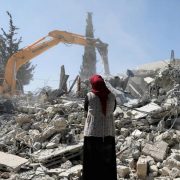 In a statement issued Saturday, the CIR affirmed that this policy aims to displace the Palestinians and seize the rest of the Palestinian lands. “This policy has all characteristics of “ethnic cleansing” according to international law”, the CIR added.

The Council called on the international community to take more bold and effective steps in response to this policy pursued by the Israeli occupation in front of the world.

The CIR stressed that the international community should consider imposing sanctions on the Israeli occupation to deter it from continuing with this policy, noting that statements alone are not sufficient.

The Council noted that the continuation of the occupation with these crimes shows that “Israel” is turning its back to the soft statements and positions issued by the international community, and feels that it enjoys immunity that exempts it from the consequences of its actions and crimes.

OCHA sounded the alarm last month warning that between March and August, during the height of the coronavirus pandemic, they recorded the highest destruction rate in the West Bank in four years.

The Un body said last Tuesday: ” So far in 2020, 689 structures have been demolished across the West Bank, including East Jerusalem, more than in any full year since 2016; rendering 869 Palestinians homeless.”