Council on International Relations (CIR) affirmed that the deliberate killing of the Palestinian detainee Nasser Abu Hamid by the Israeli occupation through medical negligence is a war crime and a violation of the Geneva Conventions.

The CIR in a statement Wednesday denounced the international silence towards this crime, in conjunction with their continuous weeping over the captive Israeli soldiers in Gaza.

“The occupation does not care about any international agreements or positions, flouting international humanitarian law and the Geneva Conventions which provides for the provision of medical care to detainees and their release in case of severe illness”, the Cir added.

The Gaza-based body called on the international community, human rights institutions and the International Committee of the Red Cross to condemn this crime and pressure on the occupying state to hand over the body of the martyr for burial, and to stop the policy of detaining the bodies of the martyrs.

The Council called, as well, on the permanent international fact-finding committee to open an urgent investigation into the circumstances of the Nasser death, announce its results, and hold the perpetrators accountable., including obligating the occupation authorities to assume their legal responsibilities towards Palestinian detainees.

The Palestinian people are still deprived of their human rights because of the ongoing occupation, crimes, siege and aggression, Council on International Relations – Palestine (CIR) said in a statement issued Saturday.

The Council said the International Human Rights Day coincides with ongoing deterioration of the human rights situation in the Palestinian territories, in light of violations of the principles of the Universal Declaration of Human Rights, international law and international humanitarian law.

The CIR added that the Israeli aggression continued through full-scale military attacks, and the imposition of an illegal and comprehensive siege on the Gaza Strip, which constitutes collective punishment and crimes against humanity under the rules of international humanitarian law.

“The occupation continues to violate the Palestinian human rights through further Judaization of Jerusalem, the demolition of homes, the expulsion of Palestinian residents from their homes, the construction of more settlement units and the theft of land,” the statement said.

The CIR also called on the International Criminal Court to hold the Israeli war criminals accountable for their ongoing and systematic crimes the Palestinian people.

Council on International Relations – Palestine (CIR) welcomed the request by the UN Fourth Committee for an advisory opinion from the International Court of Justice on the legal consequences of Israel’s occupation of Palestinian territory.

The CIR said in a statement issued Saturday, that the committee’s request gives the Palestinians an incentive to continue their legal battle to end the Israeli occupation of the Palestinian territories.

“If the ICJ concluded that this is a continuing occupation, the occupying power will face a serious crisis, and there will be a few countries that will stand by it,” the Council said.

The CIR added that this would strengthen the position of the countries that remain neutral, and give them a strong reason to stop dealing with the settlements and oppose the policy of apartheid, which will lead to the isolation of the Israeli occupation at the international level.

In its statement, the Council thanked the countries that voted in favor of the resolutions, stressing that the battle in the diplomatic arena comes within the legitimate tools guaranteed by international law to the Palestinians in their struggle against the occupation and its crimes.

Council on International Relations – Palestine accused the European Union of encouraging the occupation and rewarding it for its continuing crimes against the Palestinians by reviving the European-Israeli Partnership Council between the European bloc and the occupying country.

The council said in a statement issued, Sunday, that holding this council in the presence of the occupation Prime Minister Lapid comes in light of the occupation’s war crimes in Gaza and the West Bank and its continuous violations in Jerusalem and building more settlements.

Activating the Association Council relieves the pressure on the occupation after it was accused of committing the crime of apartheid by many international human rights organizations and the crime of assassinating journalist Shireen Abu Akleh, the CIR added.

The Council accused the EU of hypocrisy in its attitudes towards the occupation. While it claims its opposition to the occupation and the settlements in words, it practically supports them with millions of euros through bilateral projects like Horizon 2020 and Horizon Europe that directly and indirectly support Israeli companies involved in the occupation such as army institutions and companies that promote settlement.

In its statement, the Council called on the European Union to retract the Association Council meeting and not be a partner in whitewashing the crimes of the occupation and its continuous violations of international law and international humanitarian law. Instead, the CIR said, the EU must pressure the occupying power to end its continued occupation of the Palestinian territories, end the siege of Gaza, stop crimes against the Palestinians, and abide by its duties as an occupying power towards our people and their inherent rights to freedom, independence and the right to self-determination.

The European Union announced Thursday that it will hold the first meeting of the “Association Council” with “Israel” on Monday since 2012. 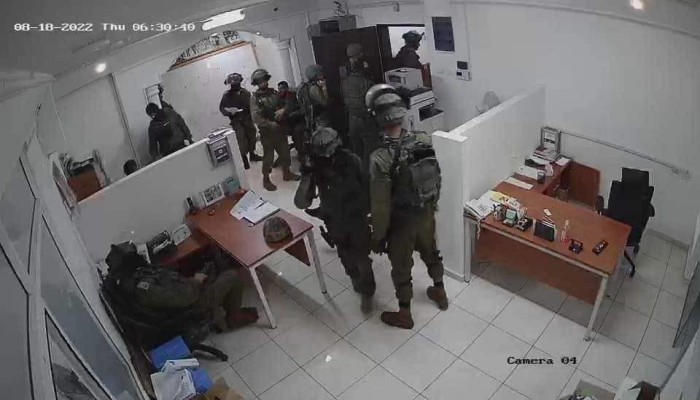 The council said in a statement issued Friday that the attack on human rights NGOs reflects the occupation’s fear of being held accountable for its crimes and bringing them to international courts.

“The occupation has disregarded all international positions that refused the occupation decision to list the NGOs on terror list. “Israel” underestimated those positions and committed its heinous crime yesterday”, the CIR added.

The Council called on the international community not to be satisfied with condemnation and hollow statements, and to move to protect human rights activists and take serious positions against Israeli crimes.

At dawn yesterday, Israeli Forces broke into, searched and sealed the offices of seven Palestinian human rights and humanitarian organizations in Ramallah. Their property was confiscated and destroyed. Israeli forces left copies of military orders to close the offices of the organizations.

Council on International Relations – Palestine (CIR) slammed the UN for leaving “Israel” off the “list of shame” issued for organizations and countries that violate the rights of children in conflict areas.

The Council said in a statement issued Friday, that this decision of the Secretary-General of the United Nations not only exonerates the occupation, but also gives it the green light to continue its crimes and violation of all international laws.

“This year report contradicts itself, as it stated that the Israeli occupation bears responsibility for killing 78 Palestinian children and maiming 982 others in the occupied Palestinian territories in 2021, and at the same time it did not include “Israel” in the list of countries and groups that violate the rights of children, the CIR added.

The Gaza-based body called on the Secretary-General of the United Nations to correct this grave mistake and add “Israel” to the list of shame, and even activate all international tools to hold it accountable for its crimes and provide protection for Palestinian children.

The “list of shame”, which presently includes 57 government military units and non-state armed groups accountable for serious abuses against children in armed conflict, is a crucial accountability instrument. According to UN regulations, countries listed on the list are only removed after agreeing to and carrying out an action plan to stop their infractions and may be subject to sanctions from the UN Security Council.

Council on International Relations – Palestine (CIR) warned against the continuation of the stifling siege imposed on the Gaza Strip, welcoming OCHA report, that shed light on the crime of the Israeli siege on the coastal enclave.

The Council said in a statement issued on Monday that the OCHA report is added to many UN and international reports that confirmed this siege violates international law and causes a humanitarian catastrophe for over 15 years.

“OCHA’s report sounds the alarm about the possibility of a new explosion, especially in light of the rise in prices and the world’s preoccupation with the Ukrainian crisis and the clear targeting of UNRWA”, the CIR added in the statement.

The Council called on the international community to break the silence and take courageous steps and put pressure on the occupation to completely end the siege and stop its continuous aggression against the Palestinian people in the Gaza Strip.

A United Nations Office for the Coordination of Humanitarian Affairs “OCHA” report has highlighted the humanitarian impact of the continuous siege on the Gaza Strip for 15 years, as the Israeli occupation authorities, according to the report, have tightened restrictions on movement to a large extent, which led to the isolation of the Strip almost completely from the rest of the world.

Council on International Relations – Palestine welcomed the vote by the American Presbyterian Church, in favor of declaring “Israel” an apartheid state.

The CIR said in a statement issued Sunday, that the Church’s vote is another witness added to the many evidence that have emerged recently accusing “Israel” of committing the crime of apartheid against the Palestinians.

The Council pointed out that the Church’s decision comes in light of the blatant Israeli attacks on the Christian presence and places of worship, including churches and properties, in the Palestinian territories, especially the occupied Jerusalem.

The successive reports accusing “Israel” of committing apartheid refute the allegations of “Israel” aimed at improving its image before the world, describing it as an “oasis of democracy” in the Middle East, the council added.

The Council called on the international community to take a bold decision to declare “Israel” an apartheid entity and to treat it as the apartheid regime in South Africa was treated with boycotts and imposition of sanctions until the occupation ends permanently.

The US Presbyterian Church, that claim over 1.7 million members, voted on Tuesday at its 225th General Assembly to declare “Israel” an “apartheid state” and designate a Nakba Remembrance Day within their calendars.

Council on International Relations – Palestine condemned the election of the terrorist and settler Gilad Erdan, the representative of the Israeli occupation to the United Nations, as Vice President of the United Nations General Assembly.

The Council said in a statement issued Wednesday that electing Erdan is a reward and encouragement for this racist apartheid state and provides more immunity for its leaders from accountability before international courts.

The CIR noted that Erdan once tore up UN reports condemning “Israel” and threw them in the trash, and his election is a mockery of the efforts and reports of the United Nations.

The Council called on the United Nations to adopt policies that punish war criminals and officials of the Israeli occupation and prevent them from assuming high positions in the UN institution whose main goals are peace and security around the world.

Council on International Relations – Palestine (CIR) expressed its strong condemnation of the European Parliament’s decision yesterday, in which the parliament condemned the Palestinian educational curricula, claiming that they are inciting.

The CIR said in a statement Monday that the parliament’s decision is an extortion, aimed at depriving Palestinian education of the financial support provided by European countries and international institutions.

“The decision is an attempt to imped the process of building the Palestinian state and its educational institutions, and most importantly to delegitimize the Palestinian struggle, and prevent Palestinian generations from learning their history”, the council added.

The Council said that the European Parliament’s decision comes in compliance with Israeli pressures and allegations, while ignoring the monitoring of Israeli curricula, which are rife with racism and calls for hatred and violence to the last detail.

The Council warned that this biased policy will not serve security and stability. “We call on the Parliament to reverse its decisions and support just Palestinian rights in harmony with international law, notably the right of generations of the Palestinian people to know their history of struggle, to resist occupation, and to achieve freedom and independence.