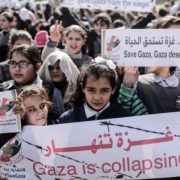 The council said in a statement issued Sunday that the letter expresses a courageous stance of these institutions that stand beside the rights of the Palestinian people and join many international institutions, decisions and reports that confirmed that the siege of Gaza is a war crime and must be lifted immediately.

The Council called on Norway, as the incubator of the Oslo accords in 1993, to pressure the Israeli occupation state to lift the unjust siege of Gaza, which has exacerbated human life and turned the strip into an open-air prison and an uninhabitable area.

58 Norwegian organizations and political parties have demanded their country’s foreign ministry to put pressure on Israel to end its siege on the Gaza Strip in particular.

“We urge the minister of foreign affairs to take an initiative at the UN and in other international bodies in order to stop the collective punishment of the Palestinians, an action that, according to the Geneva Conventions of 1949, is considered a war crime,” their letter concluded.