Council on International Relations – Palestine (CIR) denounced the warm welcome for the Prime Minister of the Israeli occupation and war criminal Benjamin Netanyahu in New Delhi on Sunday.

In a press release, the Council expressed its deep surprise at India’s denial of its long history of supporting the Palestinian people and their legitimate rights.

In violation of the principles of the Indian liberation leader Mahatma Gandhi, who once said: ““Palestine belongs to the Arabs in the same sense that England belongs to the English or France to the French”, the CIR expressed its regret over the shift of India’s position from a supportive position of the vulnerable and peoples under occupation to a supportive position of a racist state that violates international laws.

The Council considered that this support for the Israeli occupation by India is a green light to continue its aggression against our people and holy sites, especially Jerusalem.

The CIR called on India to review its positions on the relationship with the occupation, and to boycott and impose sanctions on it to retreat from its criminal policies and end the occupation of our land. 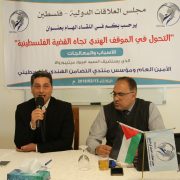