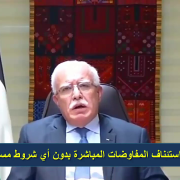 Council on International Relations – Palestine (CIR) expressed strong condemnation of the Palestinian Authority’s willingness to resume negotiations with the Israeli occupation without any preconditions.

The CIR said in a statement on Monday this step ignores what the occupation has accumulated on the ground, with full American support, over the past few years, which leaves no room for any discussion of the possibility of establishing an independent and sovereign Palestinian state on 1967 borders.

“The council was surprised by the sudden reversal of the positions of the Palestinian Authority and its rush to the path of negotiations without knowing the true position of Biden administration”, the council said.

The CIR said that the ongoing annexation of the West Bank, building settlements, systematically demolishing Palestinian homes, besieging the Gaza Strip and separating it from the rest of the Palestinian territories, and targeting UNRWA, are the least the PA must demand the Israeli occupation to stop and revoke to start any constructive negotiations.

The Council called on the Palestinian Authority to retreat from this step and not return to negotiations in light of the ongoing Israeli crimes that completely undermine the Palestinian cause.