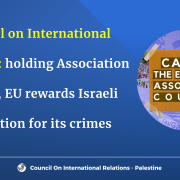 Council on International Relations – Palestine accused the European Union of encouraging the occupation and rewarding it for its continuing crimes against the Palestinians by reviving the European-Israeli Partnership Council between the European bloc and the occupying country.

The council said in a statement issued, Sunday, that holding this council in the presence of the occupation Prime Minister Lapid comes in light of the occupation’s war crimes in Gaza and the West Bank and its continuous violations in Jerusalem and building more settlements.

Activating the Association Council relieves the pressure on the occupation after it was accused of committing the crime of apartheid by many international human rights organizations and the crime of assassinating journalist Shireen Abu Akleh, the CIR added.

The Council accused the EU of hypocrisy in its attitudes towards the occupation. While it claims its opposition to the occupation and the settlements in words, it practically supports them with millions of euros through bilateral projects like Horizon 2020 and Horizon Europe that directly and indirectly support Israeli companies involved in the occupation such as army institutions and companies that promote settlement.

In its statement, the Council called on the European Union to retract the Association Council meeting and not be a partner in whitewashing the crimes of the occupation and its continuous violations of international law and international humanitarian law. Instead, the CIR said, the EU must pressure the occupying power to end its continued occupation of the Palestinian territories, end the siege of Gaza, stop crimes against the Palestinians, and abide by its duties as an occupying power towards our people and their inherent rights to freedom, independence and the right to self-determination.

The European Union announced Thursday that it will hold the first meeting of the “Association Council” with “Israel” on Monday since 2012.