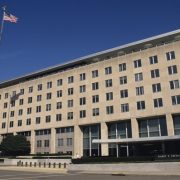 Council on International Relations – Palestine (CIR) said that the US State Department’s removal of the “the Palestinian Authority” from its website comes in the context of the liquidation of the Palestinian cause and is consistent with the extremist plans of the Israeli occupation.

The council said in a statement Tuesday the move comes after several steps taken by the administration, such as cutting off aid to UNRWA, recognizing Jerusalem as the capital of “Israel”, agreeing the West Ban to be annexed by “Israel and closing the PLO mission in Washington.

“The successive US steps represent a complete denial of Palestinian rights, disregard of UN resolutions and international law, and pave the way for annexing the West Bank and killing any possibility of a future Palestinian state”, the CIR added.

The Council affirmed that the American steps will not cancel the Palestinian presence and will not succeed in discouraging the Palestinians who will continue to resist with all means available until they achieve their legitimate rights.

In its statement, the CIR called on the US administration to stop and reverse these steps and to act as an honest broker to achieve peace in the Middle East.

The CIR called on the international community, especially the United Nations and the European Union, to take practical steps to stop the series of American steps aimed at eliminating the Palestinian issue, which affects stability in the Middle East.

The State Department defined the State of Palestine as “Palestinian territory” and then changed to “the territory of the Palestinian Authority” before it took the initiative to delete these terms permanently.