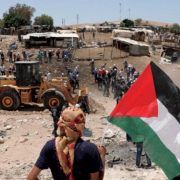 Council on International Relations (CIR) depolored the international silence over the Israeli violations in the village of Al Khan Al Ahmar, east of the occupied Jerusalem.
The Council said in a statement issued on Sunday that what the occupation’s actions is a continuation of the crime of ethnic cleansing practiced against the Palestinian people for decades.
The CIR pointed out that the current international silence encourages the occupation to commit more of these crimes, which aim to remove the Palestinians and annex their lands to the lands of the settlements illegally built in accordance with international law.
The Council called on the international community to pressure the occupying state to stop this crime and to work hard to end the occupation completely from the Palestinian territories and to implement the international agreements that call for it.
In its statement, the Council thanked the efforts of some diplomats and the courage of some MPs who addressed this crime, stressing that it is just shy voices that do not measure up to this great crime.
Khan al-Ahmar is a Palestinian village in the occupied Jerusalem. In 2018, there were 173 Bedouin, including 92 children, living there in tents and huts with its local school serving the needs of 150 children in the area.
Khan al-Ahmar is located between the Israeli settlements of Ma’ale Adumim and Kfar Adumim. In May 2018, the Israeli High Court of Justice determined that its residents could be evicted

Post Views: 658
Naim invites Prince William to visit Gaza during his next tour of region

CIR welcomes appointment members of commission of inquiry on 2018 protests in...
Scroll to top