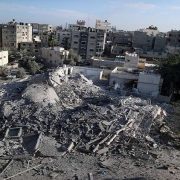 Council on International Relations – Palestine (CIR) condemned the international stance towards the Israeli assault against the Palestinians through the last two days.

This international position encouraged “Israel” to get further with committing more crimes of destroying press offices and civilian buildings, the council said Wednesday in a statement.

The Palestinian Government Information Office in the Gaza Strip affirmed that 150 Israeli air raids were carried out during which 80 buildings and institutions, including governmental and civilian facilities, were fully or partially destroyed.

The CIR said it was surprised by the German Foreign Office’s position in which it adopted the Israeli occupation narrative towards the recent events.

“The German office turned a blind eye to the blatant Israeli aggression and the right of the Palestinian people to resist it according to the international law and UN Resolutions”, the CIR added.

The council pointed out that the recent escalation broke out when Israeli special forces infiltrated into the Gaza Strip and assassinated 7 Palestinians just after 24 hours of reaching cease-fire agreement between both sides.

In the same vein, the council considered the statements issued by UN Secretary-General Antonio Guterres and European Union as biased in favor of the Israeli occupation. “Mr. Guterres and the EU didn’t refer in their statements to the Israeli crimes against the Palestinians drawing a parallel between the victims and the oppressor”, the council said.

The council called on the international community to take serious actions towards the Israeli crimes and put pressure on “Israel” to stop behaving above the law.

CIR: Celebrating the world with this day requires more solidarity, support for...
Scroll to top