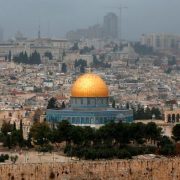 Council for International Relations – Palestine (CIR) condemns Australia’s recognition of Jerusalem as the capital of the Israeli occupation, saying it is a provocative and dangerous step that would further complicate the current situation and instability in the region.

In a statement issued on Sunday, the CIR said the timing of the Australian recognition comes in light of the ongoing Israeli aggression against the Palestinian people, the continued killing by the occupation forces in the West Bank and the assault on peaceful demonstrators in the Gaza Strip.

Australian Prime Minister Scott Morrison said Saturday that his country officially recognizes West Jerusalem as the capital of Israel, reversing a policy it has pursued in the Middle East for decades, but will not immediately transfer its embassy there.

CIR: Bolton visit to Jerusalem will not legitimize its occupation
Scroll to top