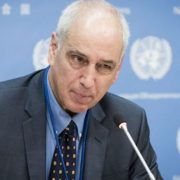 In a statement issued on Thursday, the council described Lynk’s speech to the General Assembly while presenting his annual report as a strong speech that highlighted the occupation’s violation of international law, especially in building and expanding settlements and besieging Gaza.

The Council appreciated the Special Rapporteur’s two-step proposal to the international community: an international ban on all products made in Israeli settlements, and to complete and release a database “on businesses engaged in activities related to the illegal settlements.

The CIR called on the international community to work decisively to support international law, force “Israel” to end the occupation and enable the Palestinians to self-determination, and to implement the recommendation mentioned the report of the special rapporteur.

The Human Rights Rapporteur on Palestinian territories, Michael Lynk, delivered a speech at the presentation of his annual report on human rights violations in the Occupied Palestinian Territories, prepared on the mandate of the General Assembly.