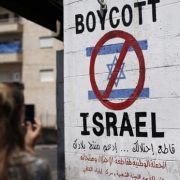 Council on International Relations – Palestine (CIR) denounced the decision of the Germany’s Bundestag to consider the boycott of the Israeli occupation as a form of anti-Semitism.

The council said in a statement issued Saturday that the decision was shameful and immoral and contradicted human rights, freedom of expression and the right of peoples to unite with other oppressed peoples around the world.

“Germany continues to pay for its historic mistakes against the Jews by exercising injustice against the Palestinian people, who are subjected to unjust and criminal occupation.”, the Council said.

The Council noted that Germany adopts the occupation’s story by considering the BDS and encourages it to practice further apartheid acts against the Palestinians.

“The Bundestag decision violated international law and even the historical decisions of the international community which adopted the idea of boycotting the apartheid in South Africa”, the council said, pointing out that adopting the BDS by many Jews around the world is blatant proof of the lack of validity of the German parliamentary decision.

The Council called on the Bundestag to retract the decision and even to support any popular action against any occupation around the world, especially the Israeli occupation, which continues to commit war crimes and genocide against the defenseless Palestinian people.

CIR Condemns handing over of Ashqar by American authorities to Israeli occu...
Scroll to top